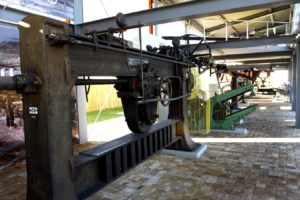 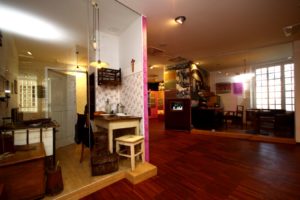 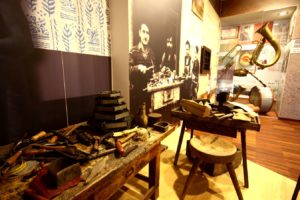 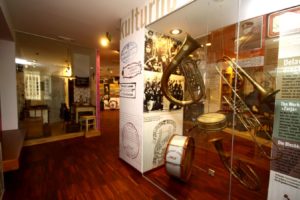 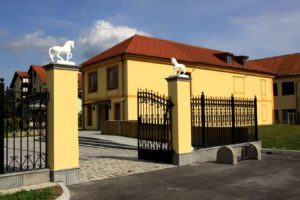 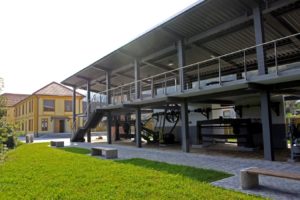 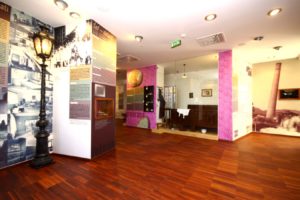 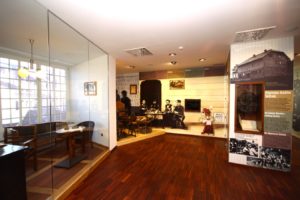 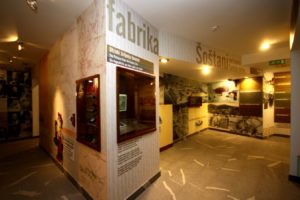 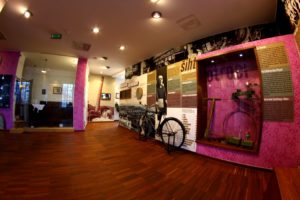 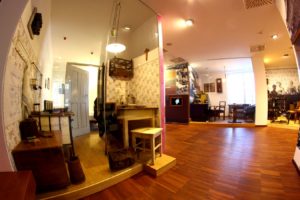 The Leather Industry in Šoštanj collection presents the development of the craft of tanning into a major industry and an important economic branch. The presentation is divided into a chronological overview of the development and a 211-year-old tradition of tanning in Šoštanj from 1788 to the closure of the factory in 1999.
—
In the modern Museum of the Leather Industry in Slovenia, a chronological overview of a 211-year-old tradition of tanning in Šoštanj is presented, from the establishment of Vošnjak’s tannery in 1788, its rise to a major industry, and finally to the closure of the factory in 1999. The exhibition Leather Industry in Šoštanj emphasises the importance of the Vošnjak family and the influence of the factory on the economic development of Šoštanj, which carries a unique mark of the city which smells of leather.
The second part of the exhibition uses ambient presentations to display the worker’s apartment, the director’s office, Lujek’s shoemaking workshop and moments from the life and fate of the Vošnjak family as the industrialists. With the activities of associations, cultural and social life of the inhabitants of Šoštanj is presented, as well as the everyday life of a worker and his family.
In the outdoor part of the museum you can see the collection Leather Processing Machines, which contains the most important machines and devices that treat skins to produce leather.
For centuries, tanning was a traditionally important craft in Slovenia. Tanning is one of the oldest and very widespread crafts that can be found in nearly every Slovenian market or town even in the 19th century. With the development of industrialisation this craft was lifted to the industrial level and in 20th century represented an important economic branch.
The largest and the best known across the entire Europe was Vošnjak’s tannery in Šoštanj, established in 1788. Due to the crisis in leather industry in the second half of the 20th century, it collapsed like the majority of industrial plants in leather industry. After closing the former Šoštanj Leather Factory (Tovarna usnja Šoštanj), the initiative board for preservation of cultural and technical heritage of TUŠ started to operate in 2002. As the years went by, the idea turned into efforts to establish a museum, which would display the rich tradition of leather industry in Slovenia.
In 2007, the Municipality of Šoštanj made the decision to establish a museum in the rooms of the former factory bathroom. Most of the funds were contributed by the Municipality of Šoštanj, while another part was acquired through a call for proposals by the European Regional Development Fund. The Museum of the Leather Industry in Slovenia began to operate on 30 September 2009, under the patronage of the public institution Velenje Museum.

Open from Tuesday to Sunday from 10 AM to 5 PM.

Museum of the Leather Industry in Slovenia

Open from Tuesday to Sunday from 9 AM to 5 PM.

Open from Tuesday to Sunday from 10 AM to 5 PM.

Open from Tuesday to Sunday from 10 AM to 6 PM.

The key to the memorial room is available at:

The gallery is closed on Sundays and holidays.

The F-Bunker Gallery is open also by arrangement for pre-announced visitors.

The headquarters of Velenje Museum are in Velenje Castle, which is famous for being one of the best-preserved Slovenian castles. In historical sources, Velenje Castle was first mentioned in 1270.

The Leather Industry in Šoštanj collection presents the development of the craft of tanning into a major industry and an important economic branch.

Visitors to the House of Minerals can see the rich collection of minerals from Slovenia and around the world, assembled by private collector Jože Rihtar.

Kavčnik Homestead is an incredible outdoor museum of folk architecture. The central room in one of the oldest wood buildings in Slovenia is a 400-year-old smoke room with an open fireplace, which served for cooking and heating.

Gril homestead holds the status of a cultural monument. The house was presumably built in the middle of the 19th century as a small winemaking house on a winegrowing slope of Lipje and Vinska Gora.

In the building of the thermal park in Topolšica, there is a memorial room which presents partial German capitulation of the army Group E and German forces for the South-Eastern Europe. It was signed by Alexander Löhr.

Memorial Centre 1991 presents the Šalek and the Upper Savinja Valley during the liberation processes of the Republic of Slovenia with its permanent exhibition, events and teaching programmes.

It is not a coincidence that Graška gora became the symbol of patriotism and fight for freedom and a place for remembrance.